Role based access for observation forms in Clinical module

Our requirement is to have different access for different users for the Clinical module at the form level.

Satvix is planning to partially develop this feature. The scope is mentioned below.

Hello, this was a functionality that our clients are interested in as well. We can get on a call to discuss your plans further. Some of the items we would need to think about:

Thanks for the update.

@sushmit I think this use case would apply to Data Filter module to use as the backend. @mksd, could you invite @sushmit to the demo tomorrow?

We have followed this approach for one of our clients.

According to Sneha, the approach for forms 2.0 is still at the idea stage and there is no timeline decided yet for its development. The same approach that we have followed (as mentioned in the above post) can be followed for forms 2.0 as well. So we have raised the PR ( https://github.com/Bahmni/default-config/pull/38/files ).

The same approach can also be followed for role-based access control for display controls on the patient dashboard. But this is an out of scope item for us as of now.

@gurkiran I am not convinced of the solution, and think even the community wasn’t (from the last call). reasons

@angshuonline Consider a scenario where the requirement is to restrict a Neurologist’s access to forms related to Gynaecology. In the current Bahmni functionality, separate roles are not defined for different specialities. Both of the above mentioned specialists are given a generic role of “Doctor”. In the approach followed by @gurkiran, if the form is not linked to any provider attributes, it is visible to all types of providers that have access to clinical app/consultation. The need to create a provider attribute arises only if the access to a form needs to be restricted.

In the approach you suggested below,

the custom attribute should specify the role (rather than specifying providers). As the number of providers keep on increasing, this is not sustainable or maintainable. For display controls, again we wouldn’t want to make it “provider” specific, rather specify “role/privilege”.

a separate role will need to be created for each speciality.

I am afraid I am not convinced.

To me, these are better ways of managing access.

Hey @angshuonline , can we discuss this over the next PAT call?

Sure. Please bring it up for discussion.

I think we also discussed the point that this approach is not extensible and suitable for further enhancements for reports and other areas. Do you have any further points on how you want to make it extensible?

I also need this type of feature implemented.

This is my first bahmni project on small clinic, that only have two type of provider, GP and dentist. They need different obs form, and whenever possible, the provider only able to use designed form for them (able to create/edit), but others can only read it (e.g nurse,pharmacyst).

Anyway out of topic what is PAT call? what is it stand for? It’s look like some sort of skype meeting right?

Very quick input based on an extremely quick read.

I think we should stick to the same kind of design as to what’s done in the Ref App. The “links” to the the forms are in fact privilege-controlled extensions.

A gynecology link-extension would be restricted to a "Access: Gynecology" privilege. And one would add this privilege to all clinical roles that require access to gynecology areas of Bahmni.

Here is an approach I am proposing for the Form 2.0 Role Based Access Levels.

Definations of the Access levels i.e (“No access”, “Read Only”, “Write” ) have already been defined by @sushmit in the thread above.

To have forms tied to privileges that we will use to validate to either “Read only” or “Write only”.

The system administrator will be required to create a privilege in the Openmrs back end that will be tied to a specific form as either “Read Only ” or “Write Only”.

(Done in the Form Builder Interface).

The feature will give provision to search for a privilege and then append check-boxes i.e (“Write”, “Read”) in a tabular format adjacent to the privilege. (The search field will automatically populate privileges based on the search).

The system administrator can then proceed to check against the privilege the desired access level.

Note: Forms not assigned to either “read” or “write” privilege will not be displayed to system users by default. They will only be accessible to users with administrator roles who can then assign the forms to a group of users.

Consider the case below:

Step 1: Create three Access levels in the back end.

Step 2: Assign the Roles in the Form Builder view Page.

The system administrator will then check the desired access level against the searched privilege as indicated in the screenshot below: 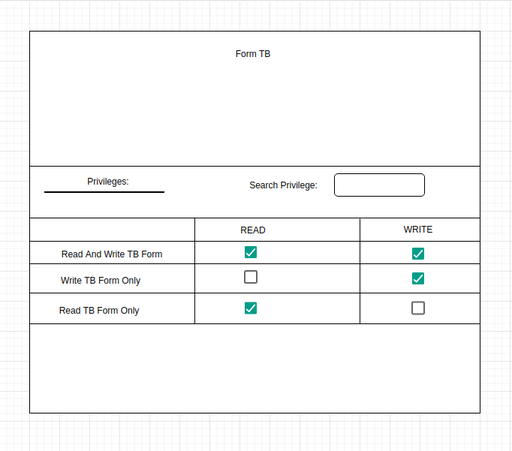 Note: A single privilege can be assigned to multiple forms.

Following-up on discussions during the latest PAT calls about the level of granularity and possibly, restrict access at a concept level, I would like your opinion on the approach below:

Define Permissions
Like suggested in @dmukungi’s latest post, a system administrator would define the access levels to a specific form for a user through a permission UI in the Implementer Interface of Bahmni.
Vice versa, it would be possible to view the list of users assigned to a form.

Filling-out a form
Any user with a write permission granted for a specific form beforehand will be allowed to fill it out. The observations would be saved along with the form name (existing column “form_namespace_and_path” for example).

Secure by design
By default, it’s not possible to read (or write) an obs if permissions to the parent forms are not granted.

Restriction/access logic
When trying to retrieve observations (in a form, display control, report, export, etc.), the query would verify that the current user has access to the form name associated with each concept record. It means that restrictions would be based on obs + form names, rather than concepts. 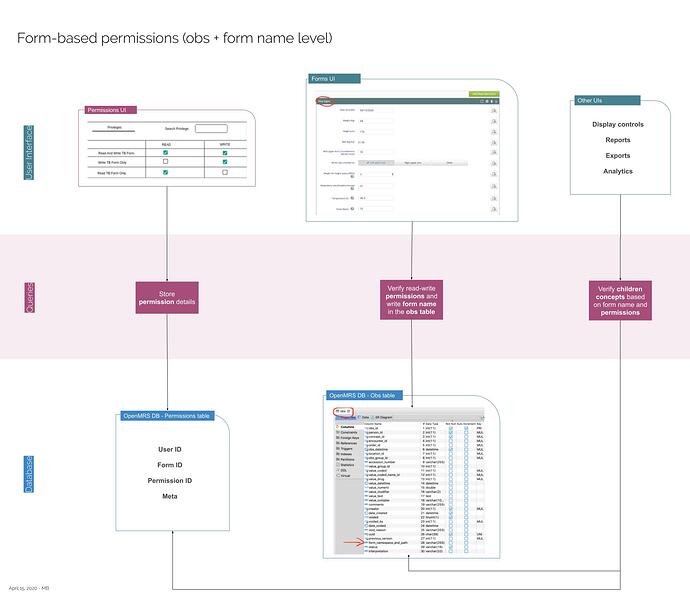 When I read this my feeling is that a number of things are conflated.

If your bottom line is that you want to restrict data access to users. In other words if you need certain obs to become inaccessible for certain users, then IMHO the simplest way to achieve this is to stick to Core’s data model.

Obs pertain to encounters, and access control to encounters is natively supported in Core and can be reinforced with low-level data ex-filtering. Let me be clear that I say this because of my understanding of your need as quoted here:

When trying to retrieve observations (in a form, display control, report, export, etc.)

If the above could be a viable approach for your needs, then managing access to forms just becomes a mere UI thing (as it should be btw) on top of the above.

Now I know that you operate within Bahmni and this will make a number of things more or less difficult depending on how strong your data protection requirements actually are.

Happy to take the pure data filtering conversation elsewhere if @dirkg and you find that this could be the way forward.

@michaelbontyes Can I request you create a different thread for this? I think this would sidetrack the topic it was created for. IMHO, what you are asking for requires a much longer and wider discussion. I would like to comment on many things that you and Dimitri wrote (possibilities, impossibilities etc) - but lets do this on a different thread.

This is regarding program-based access to forms. There is a requirement to restrict forms to programs, more specifically to the workflow state the program belongs to. This is taken up as a part of the above-mentioned feature [form based access to forms BAH-790] and hence is discussed here.

There are two approches though of,

Would like to discuss and evaluate both the approaches, pros/cons of the same and come up with a most generalized solution.