I’m trying to run the standalone openMRS application but I’m getting the following error in the screenshot. I’ve seen multiple people run into the same issue and I’ve read through the forums but I haven’t been able to get it to work.

I was initially trying to get the SDK to work, but I was running into the exact same issue. I then decided to try running the standalone application to try further isolate the issue, and the problem still persists… even though the standalone version uses its’ own mysql and tomcat built into the application.

Any ideas what I can do to fix this? 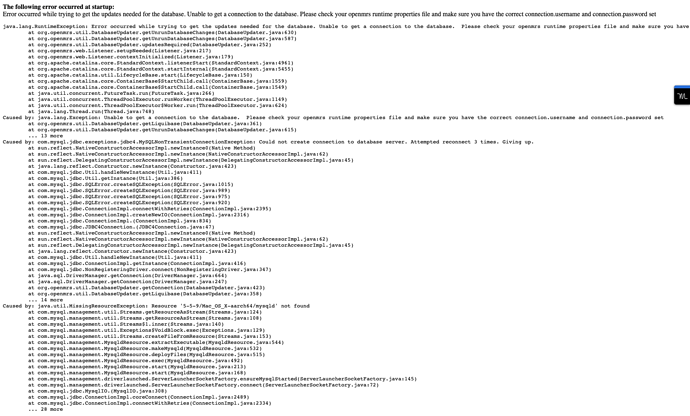 Oh sorry! kindly ensure you are using java 8 since Reference Application 2.11 is build on OpenMRS Platform version 2.3.2 which runs on java 8.

I am using v8.54 and I have attached a screenshot for confirmation.

just a reminder the Mysql you are supposed to run is 5.6

For the standalone application, doesn’t it come with its own mysql packaged with it?

I installed MySQL 5.7 when I was initially trying to get the SDK working, and that is currently running locally on port 3306.

Is it supposed to use that connection? I see that it’s configured to connect to port 3316 for the standalone application.

Juliet and I had a debugging session but I’m still getting errors. We focused on trying to get the SDK to work instead of the standalone application.

We found out that my maven was using the wrong java version, so I fixed it so that it points to version 8.x but I still have the problem. I’ve attached a pastebin of the terminal output as well as a screenshot from the output details:

I’ve also confirmed that the openmrs-runtime.properties file exists within the openmrs folder and that it contains the correct DB information

Take a look at this:

Oh yes following the instructions from the stack overflow got it working!