I was asked to start a Talk thread for @caseynth and @akanter to continue a discussion we started on twitter regarding the use of OpenMRS in Vietnam. The Vietnam implementation, called eClinica, was created with the OpenMRS platform, used the CIEL dictionary, and had a new POC UI built on top of it. It is part of a larger provincial level architecture that includes a VCT system, MPI with biometrics (fingerprinting), OpenELIS lab system, and OpenMRS for HIV C&T, and provincial-level CDA patient transfer warehouse, and provincial-level consolidated database for reporting.

Thanks, Jan! I am reviewing the export from their concept dictionary to see how it aligns with our current implementation. I do know that we have issues with duplicate Vietnamese names occurring on different CIEL concepts which breaks validation.

Taking a quick look at the export, it seems that this will be a little hard to work with. The concept names are in Vietnamese and there are misspellings in the descriptions. Many of the concepts already are in CIEL but have new concept_Ids. Can we get an export where we have the concept names (hopefully translated into English) and the MAPS? so we know which CIEL maps were originally brought over and/or attached to other codes like SNOMED and ICD. Perhaps an MDS package would allow us to do the diff against a CIEL implementation?

As you may know Mekom Solutions operates as a tech provider of OpenMRS for health facilities in Cambodia and Laos, so we are always tuned in when we see things happening in the region. Could you expand a little, and let us know if we could get involved in any way?

Cool. Do you have translations of the concepts into Lao and Khmer?

Actually this was not a requirement for our implementation in Lao PDR, our client decided that the EMR usage would happen in English. That could definitely change in the future in which case we will happily share the translation.

And for Cambodia, things are rather still in the pipeline. But whenever we get a green light regarding upcoming implementations the Khmer translation will be part of it.

I unfortunately can’t expand on the details of the current status of the work since I haven’t directed that project for a number of years. @caseynth asked me to start a Talk thread that he could contribute to and talk more about the current status, but I believe he is still traveling at the moment and may not get to this until he returns to the States. The project is funded by CDC, and is under the I-TECH scope of work. It’s implemented in Ho Chi Minh City as a provincial level solution with the Provincial AIDS Committee. Although they originally used the OpenMRS platform with HTML form entry, they ended up diverging from that and building their own very custom POC user interface under a module. They may have modified core at this point (I would think this is a likely possibility), so would be considered their own fork/distribution. Hopefully, Casey will be able to jump in here and give us more info.

We should definitely talk more about how your organization works within the OpenMRS community. @jblaya and I have been exploring the idea of service providers and how we can support them in the community. Maybe when @terry returns, we can have a call to talk more?

@janflowers, just wanted to be sure that Casey saw this request for English…

Hi Andy, sorry my OMRSID was messed up, but now I have a new one.

So, sadly we don’t have any in-house folks that can do the translation, and we are down to the dregs of funding for this award. I’d be happy to grab you an export of the concept tables, or if you have a better export in mind, I’d be happy to run it.

Yeah, this OMRS runs on the 1.9 core and has a module with some UI changes and such. 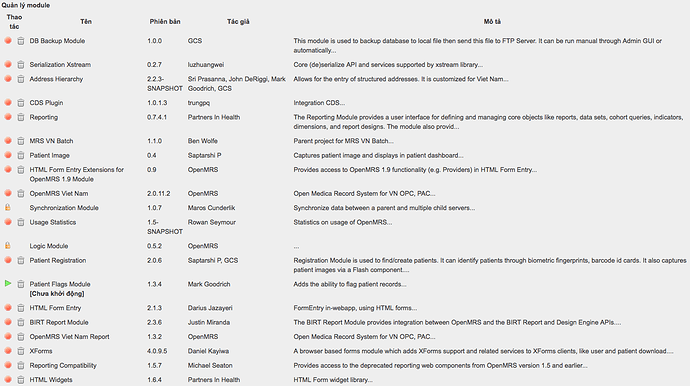 There is the screenshot of them. The database has been heavily modified outside of the module however, and so we have to import a DB which has had all the tables with patient data truncated (thanks to whomever it was that uploaded that list to the wiki)

Yeah, so sadly I can’t get the concepts translated, but I’m happy to help any other way I can. This group is moving out from under CDC funding and will be on their own, it may be a good opportunity for the implementers meeting scholarships.

Thanks, Casey, would you be willing to export the concept tables and zip them up? Perhaps I can load them into a local MySQL database and do the joins I need. It would be great if there are some Vietnamese speakers out there who might be willing to help with the translations. If they do assign CIEL IDs to the exiting concepts they should be able to use MDS or the new OCL module to bring in new concepts and maps from CIEL without having to replace local concept_ids.

Sounds good, which tables do you need? Just all the obvious ones?

Mostly need to have the concept, concept_name, map tables at a minimum