Some of these can be changed via modifying configuration, others may require custom programming. There are 2 ways to make the configuration changes, depending on your desired goal.

If you want to remove functionality entirely, from all users, look under System Administration --> Manage Apps. For example, I removed my Vitals app from the home page for all users by disabling the referenceapplication.vitals app.

Some thinks, like removing the Vitals link under the Visit Actions will require programming based on my experience.

Yeah I removed the vitals app from my homepage too. I want the patient chart to show what programs the patient is enrolled in and maybe the patient’s doctors instead of what it shows right now is that possible?

Untitled3.jpg1365×639 116 KB
If I decided to go with this dashboard…how would I disable the other one so that this one is more accessible to users?

I think it will affect Provider management module as well as some other modules :S

This can be solved by the Role-Based Homepage module but then again, It’s no longer available.

One possibility would be to use relationships (between patient and doctor), which would allow you to show the patient’s doctor that way. I tried enabling the referenceapplication.personalRelationships App, but it never actually runs. I played with this a long time ago, but forget what I did to make it work. It seems perhaps it’s not fully tested and not yet released.

Programs and States, haven’t been integrated into the new UI yet. According to the Roadmap, they are scheduled for “Someday”… https://wiki.openmrs.org/display/docs/Technical+Road+Map

This is what my “Configure Metadata” page looks like: 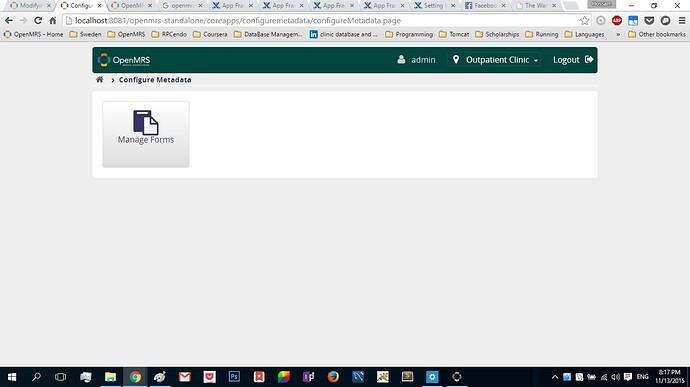 Are you running OpenMRS 2.3? They should be there if you’re running this latest version.