For @darius, we have decided to be having the meetings in these time frames

That would be 9am Chicago time. Wed and Fridays work at that time for me currently.

@darius does a call tomorrow work for you?

Sorry, to be clear, I am at the OpenMRS meeting in NBO and I probably would not be able to do it this week.

@akanter, we are going to set up a call with Darius on Thursday ( 7am Seattle = 6pm Nairobi = 4pm Lagos). Hopefully, you will be available for the next one.

But Thursdays at 9am Chicago time is NOT a great time for me, however… on an ongoing basis. If that’s all Darius can do, then go for it.

@akanter, the call we will be having on thursday will just be a check up from @dkayiwa and @darius. They will be evaluating our progress to see whether we should avail the application to the public for testing.

Let’s talk Thursday this week, but for the future, can we make this a recurring call on Wednesdays or Fridays, so that Andy can join also?

In the big picture, we should be pushing to achieve the MVP, i.e. Minimum Viable Product. In other words, what’s the first release we can get out that’s at least a bit useful for a real user. At this point I think we can be even more specific here, and think of this as “the first release that will get @ball from PIH to find value in the system”.

Several key points about this:

So, I don’t care about a specific release date as such, but I care to see real progress towards an MVP, without “wasted” effort doing non-MVP things. And getting the MVP released is going to mean having (eventually positive) feedback from people outside the dev team.

A month ago, I asked @ball to do some testing and provide feedback, which she did in this message. I assume that you fixed some of these issues in the last sprint, but I do not see any detailed reply like “we created x, y, z tickets”, or later on “Hey, we have now fixed x, y, and z issues that you reported, can you please re-test?”

Also, back on Oct 20, @muhozi said that you would give us a list of tickets needing UAT, which I don’t think happened.

@raff I’m experiencing the CORS error again. Did anything change since yesterday?

@cintiadr, I ran ansible for qa yesterday. Is it possible that it reverted your changes?

That would only make sense if you didn’t do a git pull first:

I checked the server, and it doesn’t have that configuration. Would that make sense?

@darius, thanks for the feedback given and the OCL team will implement the requested changes as from today in order to make communications efficient.

Are you in a position to fix this? We need it to be able to release the OCL client.

Are you in a position to fix this? We need it to be able to release the OCL client.

I think so. I did pull @raff changes and reran ansible. I hope that it was enough.

It works now. Thanks.

Here is an updated link that works @darius @dkayiwa

Here is an updated link that works @darius @dkayiwa

Hello community, here is the link to the call recording.

Is this still the best place to report improvements/bugs?

#1 The name and description exceed the popup box width. 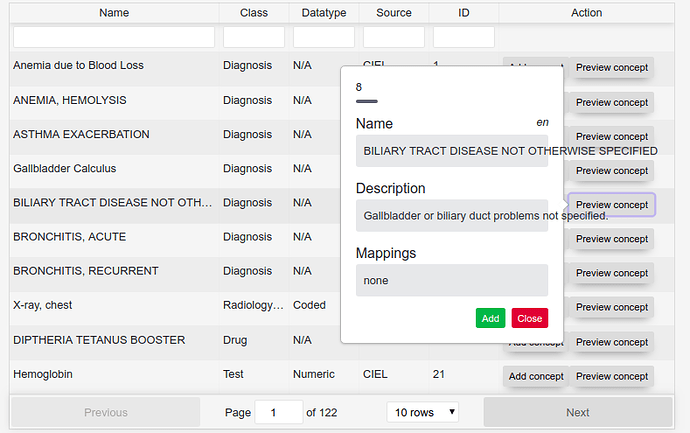 #2 When adding a concept from source (CIEL), show the set members. How else cna you decide what to add?