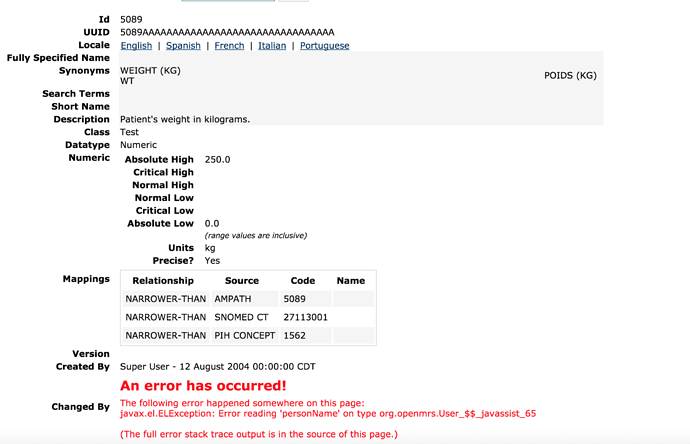 This blocks my edit concept or anything else

I am looking for a workaround to this error

What are your tomcat and java versions?

Can you show us the full stack trace? A first sight looks like corrupt data. Have you tried with another concept?

Updated answer thanks to @darius

I checked which user is the changed_by for that concept , then checked the person_id is associated with that user_id

@judy, btw, if having a retired user causes the UI to break, that’s a bug that needs to be fixed. Was the user retired or actually missing from the db?

If user 56 for some reason is corrupt (for instance, it points to a person that do not exist) other parts of the application will break too. In that case you should fix the user, not the concept.

Therefore a foreign key is missing in Concept table (Changed By column must reference User). Hibernate probably threw an exception when trying to load the entity.

Judy, did you load the CIEL version from dropbox or did you make your own version? I should be removing any user 56 from the dropbox versions…

That is as expected. I track the users in CIEL but remove them in the public distribution. I suggest you use the Dropbox version.

thats what i was using @akanter