Those who have tried to make a API call from either demo.openmrs.org or qa-refapp may have experienced it. https://qa-refapp.openmrs.org/openmrs/module/webservices/rest/apiDocs.htm

The reason is that the host name of the Swagger Spec is invalid. The problem possibly is in here, which always returns the ip of the localhost (127.0.0.1).

If others could confirm, we can work on a fix.

How does one reproduce the problem?

How does one reproduce the problem?

Then make any valid request by clicking one of try out buttons.

One could try GET /drug. Once you made the request, there will be no response from the server as the request is sent to an invalid url.

For instance /drug, what is the invalid url, and what should the correct one be?

No I mean when making a request. Once clicked on the try out button. It is nothing to do with the drug resource.

Requests are sent to 127.0.0.1. It is being always that way. So one can only make a request when running from localhost.

I do not seem to understand. Do you mind just answering the two questions i put above? 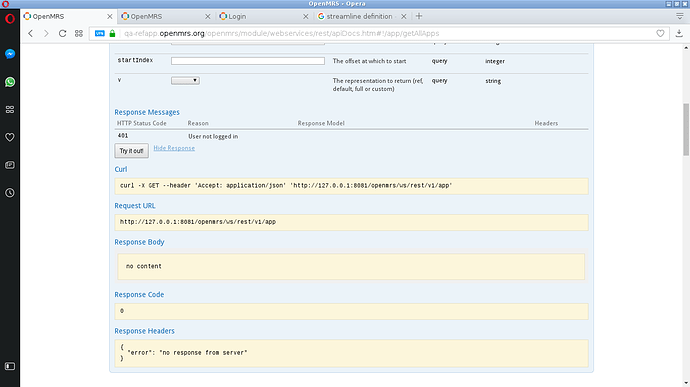 This is what I see when I invoke GET /app from qa-refapp.openmrs.org

I guess that one fix for this is to set the global property for the REST API root url on that server. Maybe it’s not set?

It is to do with the host parameter of the swagger spec.

I think the simplest solution will be to simply omit host, and schemes params from the spec as suggested in here. https://swagger.io/docs/specification/2-0/api-host-and-base-path/#omit

BTW I’m not really sure what do you mean by ‘REST API root url’ .

I was talking about the webservices.rest.uriPrefix global property mentioned here.

This is used elsewhere in the REST module (e.g. when generating links in resources) to let you use a different URI than what the request is reporting. So maybe the correct fix is to use that GP in generating the swagger spec also.

(Or maybe leaving it blank will work fine. I don’t know if that’s allowed, or anything about swagger specs myself.)

Thanks for the information.

May be @pascal will have an idea whether we should omit these (host and schemes) or not.

I would say that for now, fix it with what you think is best. Then later on when others comment, you can always revisit it.

The value of webservices.rest.uriPrefix is supposed to be the external IP that consumers of the REST API would use. I.e. it should be set to http://yourdomainname.org/openmrs.