What do you mean by these two modules not being able to work together?

According to some sources on internet people are having issues trying to run HL7 and REST module together. I am not sure as I am a newbie to this huge environment. I was using Java jdk 8 for openMRS but now I came to know that for running standalone version and installing modules I have to run it on jdk 7. So I installed the older version of java i.e jdk 7 but know while running the jar file I am getting this error “og/openmrs/standalone/Bootstrap :Unsupported major.minor version 52.0”…I don’t know why is it throwing this error I have checked on my system whether any previous version of java is installed but I found nothing. Is there a possibility that there is different version of openMRS for jdk 7.

but then why is the module not getting installed. After I add a module I get an error and after manually removing the module it starts working. Is there any step I am missing for installing a module? 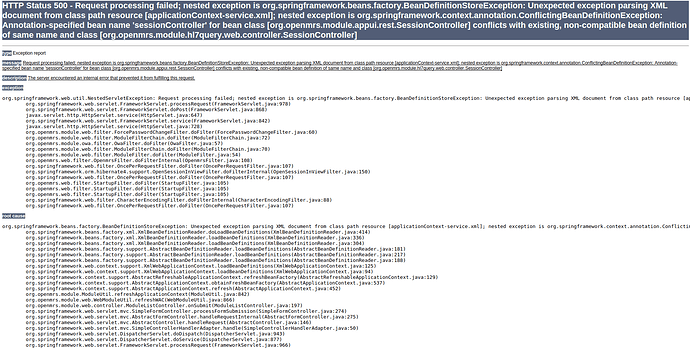 In the standalone, there is a logs folder. Can you copy the contents of that file and paste them into pastebin.com?

Maybe I didn’t see this above, but what exact OpenMRS version are you running, and what version of the HL7 Query module?

Is there any hl7 query module for the latest version.

In the given repository the files are still in java format is there a way could get complied version of the module.

I have downloaded standalone version 1.8.2 for the hl7 query module but the installation is giving an error OpenMRS requires Java 6, but is running under 1.8.0_131.

I don’t know what to do?

Can you create a ticket for this under the HL7 Query JIRA project?