Hey devs, Am working on automating the End to End Test for RefApp 2.x Roles And Privileges.

I tried deleting a role on the qaserver at https://qa-refapp.openmrs.org/openmrs/adminui/metadata/roles/manageRoles.page#/list but that fails with An error has occured message.

I tried that with the demo server too at https://demo.openmrs.org/openmrs/adminui/metadata/roles/manageRoles.page#/list

And the local instance of the SDK as well at http://localhost:8083/openmrs/adminui/metadata/roles/manageRoles.page#/list.

Any assistance on how to go about this?! cc: @dkayiwa @kdaud @sharif 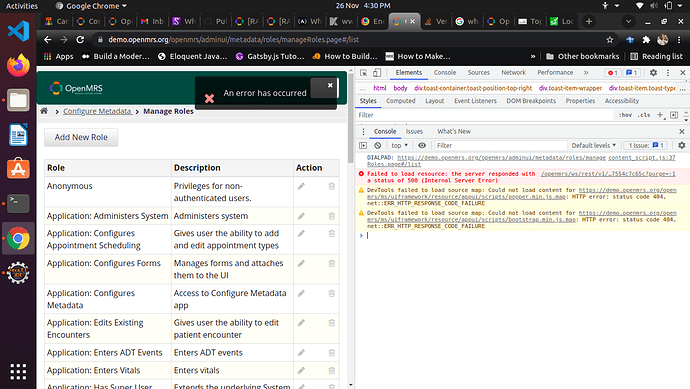 Though the delete button is availed on the Manage Roles Page, its more likely that a role can not be deleted via the page. Deletion of a role should be effective when done via System Administration → Advanced Administration →

@sharif do you have an idea on the subject?

All one can do here is add a role

Roles are defined in Reference Metadata Module which you cannot remove as part of reference application, However, you can delete a new added Role from legacyui admin section which i would reccommend to use that part as your work.

There was a conversation here which is still worth looking into to figure out whether we might need this functionality working again in ReferenceApplication.

As per that conversation, a recommendation was made to have that ticketted but I guess it wasn’t

@sharif why would i have an objection to what i suggested?

Thanks @mherman22 ,Have made it ready for work